Red blood cells (RBC) or erythrocytes, are small cells responsible for oxygen transportation throughout the body. They take up oxygen while circulating through the lungs and deliver it to all the other organs of the body (muscles, brain, liver, intestine, etc.).

Red blood cells (RBC) or erythrocytes, are small cells responsible for oxygen transportation throughout the body. They take up oxygen while circulating through the lungs and deliver it to all the other organs of the body (muscles, brain, liver, intestine, etc.). Oxygen is indeed essential to every body cell!

To transport oxygen, RBCs are filled with a red substance which gives them their color: haemoglobin.

Anemia is a reduction in the number of RBCs in the blood. It is often detected through a blood test which reveals a decrease in RBC count, in hemoglobin concentration or in haematocrit (also called packed cell volume which is the volume occupied by the RBCs in the blood). These three values being closely linked, most of the time all three are decreased.

The first detectable sign in case of moderate anemia is poor performance. In case of severe anemia, mucous membranes (notably in the horse’s mouth) can appear paler than normal, and the horse is less willing, energetic and sturdy than usual and more quickly out of breath. If the heart rate is monitored, an abnormal increase of heart rate during exercise can be noted.

NB: Horses have a particularity which is a reserve of RBCs in their spleen which are released in case of effort or stress. This multiplies by two the number of RBCs and therefore the blood’s capacity to transport oxygen to the muscles, thus enabling the horse to run faster and escape from predators (this is an evolutionary advantage inherited from their wild ancestors)!

Causes of anemia are numerous. We usually classify them in three types:

In cases of severe injury with major blood loss, anemia is a logical result. If the blood loss is massive and sudden, it can be necessary to transfuse the horse with blood from a donor to replace the RBCs (and other important blood components) lost by the horse. If there is limited blood loss, the horse will gradually compensate for the loss by making new RBCs within a few days to a few weeks.

NB: a 500-kg horse has about 45L of blood and what might appear to be a massive blood loss to a human is not necessarily so for a horse.

A non traumatic cause of severe hemorrhaging is guttural pouch mycosis. It is a fungal infection that progressively destroys the carotid artery wall within the guttural pouch(es) and can lead to massive hemorrhaging when this weakened carotid wall is eventually torn open by the pressure of the blood. This condition can sometimes be fatal and this is why, in case of nasal bleeding, guttural pouches should always be checked by endoscopy.

Sometimes the blood loss is not visible. It happens in cases of peritoneal or thoracic haemorrhage for example. The right dorsal colitis is an ulcerative disease of the large colon due to NSAIs toxicity. It leads to protein and sometimes blood loss in the lumen of the intestine.

In case of a stomach tumor (carcinoma), chronic bleeding can lead to anemia in the long term.

In case of severe intestinal parasitism, an anemia can also occur as a result of the microtraumas made by the worms to the intestinal mucosa. This cause of anemia is rare in most countries nowadays due to deworming programs that are largely applied in all stables.

NB: Contrary to popular belief, gastric ulcers very seldom lead to anemia, and then only in extremely severe cases.

Although rare in horses, intoxication with rat poison containing antivitamin K can lead to multiple internal and/or external haemorrhages and a resulting anemia. Indeed, Vitamin K is needed for the coagulation process, and without vitamin K, the slightest trauma can lead to severe, prolonged and possibly fatal haemorrhaging.

Besides traumatic hemorrhage, the most frequent cause of anemia in horses is abnormal destruction of RBCs, which is called hemolysis. Hemolysis occurs when RBCs are weakened by an infection (parasite, bacteria or virus) or when the immune system mistakenly targets RBCs and destroys them.

A common cause of haemolytic anemia in Europe is piroplasmosis. It is due to RBC infection by a microscopic parasite (Babesia caballi or Theleria equi) transmitted by ticks. The parasite multiplies in the RBCs and weakens them until they burst, releasing the newly-formed parasites that infect other RBCs.

Equine ehrlichiosis is an infection of white blood cells by the bacteria Anaplasma phagocytophilia, transmitted by ticks. The mechanism by which RBCs are destroyed is still not completely understood.

Leptospirosis is a bacterial infection that can, in some cases, induce an haemolytic anemia. The bacteria is transmitted by rodent urine.

Equine infectious anemia is a severe contagious disease due to a viral infection transmitted by horse flies. Once infected, the horse remains infected its whole life and  can present sporadic crises of haemolytic anemia. Coggin’s test is used to diagnose this condition and infected horses must be declared because they are virus reservoirs for horseflies which become contaminated and infect other horses nearby.

Finally, Lyme disease (Borrelia burgdorferi infection) seems to be implicated in some cases of anemia in horses but the ways in which this bacteria acts are still unknown.

These 5 diseases (piroplasmosis, equine ehrlichiolis, leptospirosis, Lyme disease and equine infectious anemia) can elicit quite similar clinical signs of fever, depression, jaundice and anemia in their acute form. These symptoms are thus often referred to as “piro-like”. In their more chronic form, these diseases can lead to only a mild subclinical anemia (no or few clinical signs). They are thus often tested for by blood tests in cases of anemia with no obvious cause.

Rarely, intoxication with some plants like red maple leaf (in North America), or plants of the onion or cabbage families lead to massive and sudden oxidation of haemoglobin molecules within RBCs, and their destruction.

RBC synthesis occurs in bone marrow and necessitates several elements including iron, copper, vitamin B12 and folic acid. If one of these elements is missing, or deficient, RBC synthesis slows down and this can lead to anemia. These deficiencies, particularly iron deficiency) are frequent in humans but extremely rare in horses.

More frequently, in case of chronic infection (abcess, pneumonia, etc.), a moderate anemia occurs. It is due to a protective mechanism of the immune system: as bacteria need iron to multiply, the immune system holds back the iron in order to slow down the infection development. But as iron is also needed for RBC production, this is also slowed down.

More rarely, in cases of chronic renal insufficiency, an anemia occurs. It results from decreased production of erythropoietin (EPO) by the diseased kidneys and by insufficient elimination of toxic body waste by the kidneys. This waste accumulates in the blood stream and weakens the RBCs.

Finally, in extremely rare cases of aplastic anemia, the bone marrow can be deficient in producing RBCs.

Anemia in horses can thus have multiple causes. Some are obvious (hemorrhages) but some are far more difficult to diagnose and necessitate diagnostic procedures and/or laboratory tests. Vitamin and iron supplements will only be efficient if the horse is deficient (rare) or if it has lost a lot of RBCs (haemorrhage, piroplasmosis) and needs to replenish its stock of RBC. On the contrary, if the anemia is secondary to a chronic infection, supplementation will have no beneficial effect and might even be harmful if too significant or prolonged.

Dietetic complementary feeding stuff for horses enriched with vitamins and 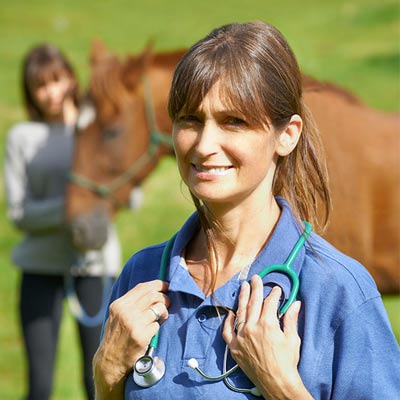